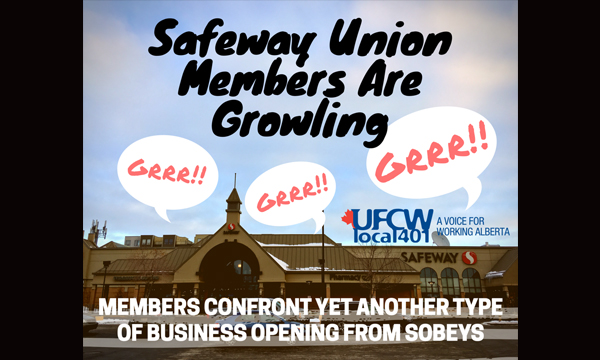 Over the past several weeks, UFCW Local 401 has been pressing Sobeys for information over its business plans for its Safeway operations in Alberta, plans that could have a real and significant impact on union members.

An Exchange with Sobeys on its Plans for Alberta

In a recent exchange with Sobeys, UFCW Local 401 demanded particulars regarding business changes coming to Safeway. In their response, the company refused to be forthcoming.

“We won’t take no for an answer,” says UFCW Local 401 chief negotiator, Tom Hesse. “That’s why we’ve pushed back. Their response was curt, coy, and disingenuous. We’re going to keep pushing Sobeys for honest transparency.”

Sobeys recently divulged to UFCW Local 401 plans to open Safeway Pharmacy, a new banner seemingly akin to a Shoppers Drug Mart. “We hear from Sobeys about plans to open a brand new, never-seen-before, standalone store, a sort of pharmacy-grocery hybrid,” says Hesse. “Combined with the FreshCo announcement and that of a new pharmacy/grocery banner, we have to ask: what’s next?”

Click the below links to see, transparently and in their own words, the exchange between UFCW union negotiator, Tom Hesse, and Ryan Shannon, of Sobeys:

In the last few weeks, Safeway union members received a comprehensive report outlining employees’ feelings about working in the stores. Union polling was based on a large and representative sample and revealed considerable anxiety among workers.

“Safeway staff are growling in the stores,” says Hesse. “They’re saying they are willing to work hard to help the company, but they are also making it clear that a strike is not something they fear. In fact, ninety-one percent will vote for that option, if pushed.”

Local 401 has now selected its negotiating committee and a bargaining council. Drawn from UFCW members working in Safeway stores across the province, these two groups will guide the negotiation process and communicate with Safeway union members.

Click here to see the UFCW 401 bargaining committee and council for Safeway/Sobeys bargaining.

“The committee and council are there to represent their fellow workers and to form a real connection between what happens at the bargaining table and the sentiment of union members in the stores themselves,” says Hesse.

As Sobeys Leaves us in the Dark, the Growling Grows

“We want to advance a vision for Sobeys in Alberta,” asserts Hesse. “That vision will get the company out of the trouble in which they’ve put themselves while ensuring the prosperity and well-being of its employees.”

But crafting proposals is difficult in the present context. “One of the real problems is the company’s secretive approach,” says Hesse. “It’s hard to know what to propose, as the company won’t reveal plans. If you don’t know what the plans are, you don’t know the issues. If you don’t know the issues, you are left to guess what proposals to write, and it becomes difficult, if not impossible, to set priorities and make bargaining decisions. If Sobeys wants a working relationship, why are they leaving us in the dark? It’s a recipe for mistrust and conflict.”

The anxiety of Safeway employees in Alberta is turning to anger.

“The result is predictable,” continues Hesse. “A chorus of growls can be heard coming from the stores, and it is that growling that will fuel relations with Sobeys until they see just how destructive their approach really is.”

Update on Other Provinces

News around Sobeys’ negotiations in other provinces has been circulating in both traditional and in social media. It’s important to keep in mind that negotiations in different jurisdictions are impacted by different laws and labour relations environments.

Here is a very brief summary: