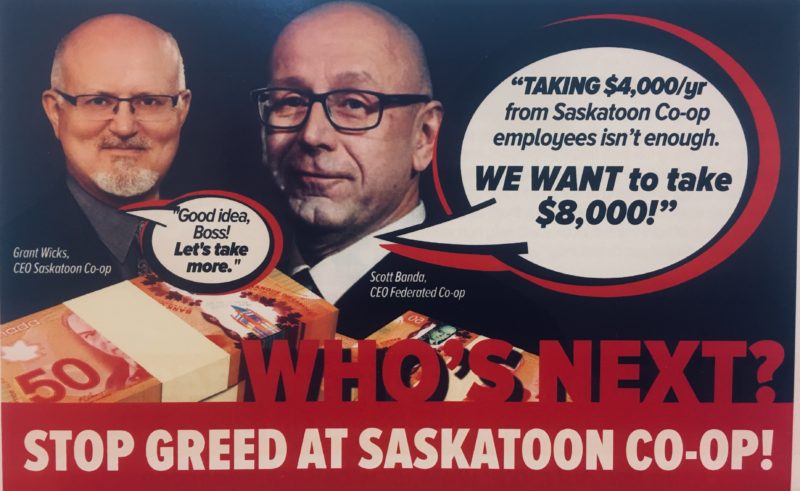 Calgary, AB – December 5, 2018 – UFCW Local 401 members in Calgary took action today in support of Co-op workers in Saskatoon. Handing out leaflets and free grocery bags, UFCW members asked customers to speak up and send a message to Saskatoon Co-op CEO, Grant Wilks, under whose direction the company has pursued an agenda of wage cuts and disparities among Co-op employees.

UFCW Local 1400 members working at Saskatoon Co-op were forced out on strike on November 1, 2018, by a greedy employer who wants to roll back the principles of the cooperative movement – principles like fairness and pay equity.

Saskatoon Co-op has taken a hardline in negotiations with Local 1400, demanding that full-time employees earn up to $7,900 less per year for doing the same job. They also want new workers to be on a lesser pay scale altogether. Meanwhile, Federated Co-op’s senior managers and directors share nearly $10-million a year. Saskatoon Co-op employees are fighting back.

“In the strongest possible terms, we express our solidarity and support for the struggles of our fellow UFCW members in Saskatoon,” said UFCW Local 401 President Douglas O’Halloran. “A cooperative shouldn’t be run on corporate greed but for the good of its members, many of whom are also Co-op employees. Co-op needs to do well by unionized grocery workers in Saskatchewan, and they should be careful about bringing those kinds of perspectives to negotiations in Alberta.”

For more information on the Saskatoon Co-op strike, visit www.ufcw.ca/saskatooncoop.