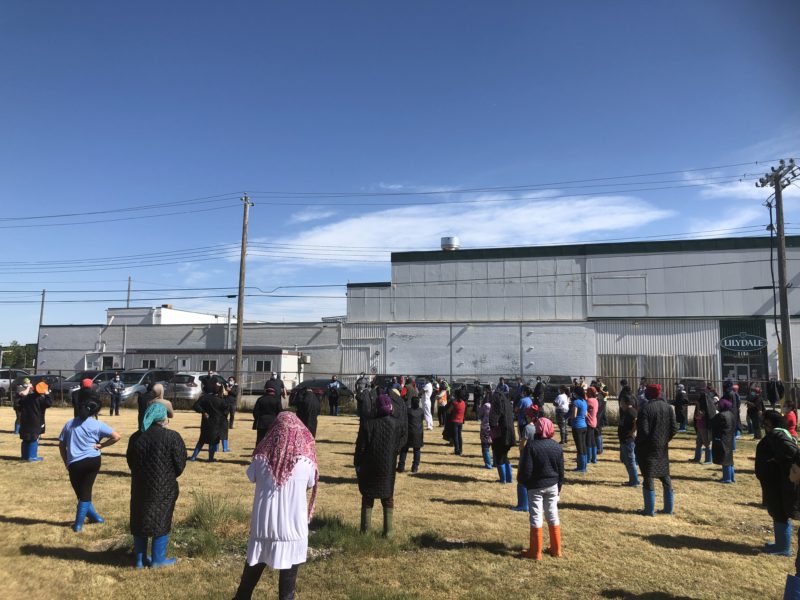 August 28, 2020 – Calgary, AB. With 25 positive COVID-19 cases reportedly affecting workers at the Sofina/Lilydale poultry processing plant in Calgary, United Food and Commercial Workers (UFCW) Local 401 President, Thomas Hesse, reiterates the union’s call for the immediate closure of the facility until the outbreak has been demonstrated to be contained and the workplace is clearly safe.

An outbreak affecting the facility was announced by Alberta Health Services on Monday, August 24, 2020.

“Health and government authorities, company officials, and union representatives have closely monitored this evolving situation,” said Hesse. “Unfortunately, in spite of recent interventions, positive case numbers continue to increase. Whatever is being done is clearly not enough. The risk of spread is too high, and the possible costs are too grave.”

UFCW Local 401 asked Sofina management to consider closure and to provide information to the union so that it could conduct its own investigation into conditions at the plant. That letter is available here: https://bit.ly/31wv0Pl

After consulting with its members, on August 27, 2020, UFCW Local 401 formally called on Sofina and AHS to temporarily close the plant: https://bit.ly/3lpxM0q

On April 23, 2020, UFCW Local 401 called on the Alberta government to conduct an independent investigation into meat plant outbreaks and issue clear and enforceable industry regulations to protect food workers. That call has gone unanswered.

“The Alberta government has refused to investigate the conditions that cause these outbreaks and has provided no form of guidance, directives, or leadership in ensuring food processing workers are safe in their workplaces,” said Hesse. “Our members at Lilydale are telling us they are afraid to go to work in these conditions, and they overwhelmingly feel the plant should be closed.”

UFCW Local 401 conducted a survey of Calgary Sofina workers with 90% saying they feel afraid to go to work. Worker comments collected in that survey have been shared with the company and the authorities as part of the union’s efforts to have those officials close the plant until it is safe.

Some statements from Sofina/Lilydale employees submitted in UFCW’s survey are provided here so written:

“If the covid19 measures [were] well implemented there shouldn’t [have been] an outbreak.”

“I was surrounded by [COVID-positive employees] in the lunchroom but since they did not mention my name to be a possible contact am I not supposed to be in quarantine?”

“I think that we should close the workplace for 14 days for proper cleaning to happen. Then we can get back to work after the cleaning and 14 days.”

With mounting pressure from UFCW Local 401 and union members, Sofina/Lilydale advised today it would cancel the second shift scheduled to work on Friday, August 28, 2020.

“While we applaud the move by Sofina to hear us and to cancel tonight’s shift,” said Hesse, “we have no assurances that work scheduled for next week will be halted and simply no leadership from government or other authorities. One could easily argue that there is a danger clearly posed by an uncontained outbreak of COVID-19 related to this workplace. Our members are right to feel afraid, but they also know they have the right to refuse dangerous work.”

Meat processing plants have been found to be particularly susceptible to the spread of COVID-19 infection. An outbreak at the Cargill facility in High River was at one point the largest outbreak linked to a single site in North America. That outbreak led to the deaths of plant workers, Hiep Bui and Benito Quesada, and Armando Sallegue, the father of a Cargill employee. Another major outbreak occurred at JBS, a major meat processor in Brooks, where hundreds were infected with the virus.

On April 23, 2020, UFCW Local 401 called on Jason Kenney to protect Alberta’s food workers facing the spread of COVID-19 in their workplaces: https://bit.ly/3gFSIgd

An aging facility located in a residential neighbourhood, there are approximately 400 workers employed at the Sofina/Lilydale plant in Calgary. The plant is slated to move to a new location in 2021.

UFCW Local 401 and Sofina Foods are currently in the process of negotiating a new collective agreement affecting the Calgary facility, and workers at the plant may soon be in a legal strike position.

Lilydale workers in Calgary attend a “town hall” meeting at the plant on Monday, August 24, 2020, where it was announced that 15 workers have tested positive for COVID-19 (Photo: UFCW Local 401)