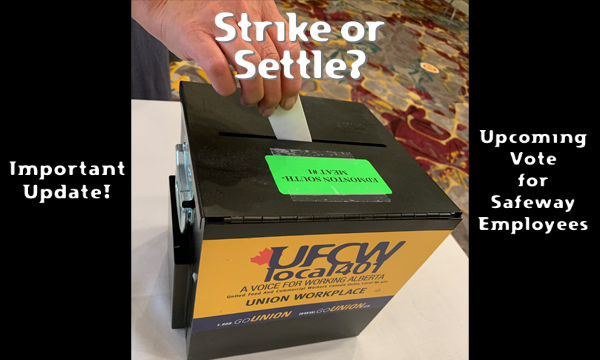 After our strike vote, your Local 401 negotiating committee returned to the bargaining table with a government appointed mediator. Agreement has been reached on some issues that were not agreed upon before. Impasse was reached on six issues. Today, the government appointed mediator released her recommendations on those six issues. The company has said that if the Safeway membership votes in favour of the mediator’s recommendations, and the items that have been agreed upon, they will also accept that overall new Collective Agreement.

The bargaining committee is reviewing the mediator’s report today. Their initial, overall opinion is that the report, combined with the agreed upon items, is the best deal that can reasonably be achieved without a lengthy strike or lockout.

As promised, when the strike vote was conducted, there will be no strike before union members get to vote on this newly generated offer of settlement. Again, to be clear, the offer is a combination of tentatively agreed to items and a mediator’s recommendation on the six issues over which the parties were at impasse.

We are in the process of assembling documents to provide to you very soon in anticipation of the voting process. But we felt it critical to give you as much notice as possible of the voting times and locations so you can plan your schedule accordingly.

This week you will start to receive information about the proposed deal. Next week we will be conducting telephone town hall meetings to further explain the proposed contract. Please plan to join one of these meetings, which will occur July 29 at 7 PM; July 30 at 7 PM; and July 31 at 11 AM. You will receive another email with all the details for these meetings, but please mark your calendars.

Voting on the contract offer of settlement will occur on August 4, 5, 6, and 7. Specific times and locations are outlined in the link below, and please be reminded that you can vote at any location during any of the set-out times. You will note that the voting process is the most expansive that Local 401 has ever had. President Hesse and Treasurer Stewart have commenced an initiative at our union that seeks to ensure a high level of democratic participation and opportunity in decision making. Our four-day voting process is lengthy and it includes polling stations that we have never had before. The point of this is to give as many people as possible the opportunity to vote on this new critical Collective Agreement.

We look forward to seeing you out at one of our polling stations. It is critical that you come out and vote. If the Agreement is turned down, a strike is the alternative course of action at this stage.

You can access voting times and locations by clicking HERE