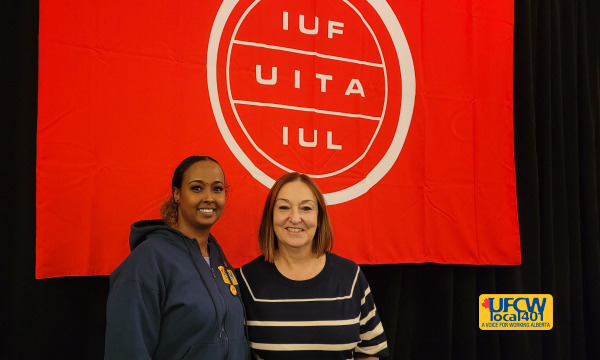 This year’s IUF International Meat Division conference was held in Calgary and boasted an impressive list of labour activists and trade unions from around the world, and UFCW 401 was proud to be there to contribute.

The IUF is global federation with a membership consisting of workers from all over the world who work in food processing and production, as well as hotels and restaurants. Their stated goal is to unite and fight for workers across the food chain.

On October 4-5, dozens gathered to discuss the important work being done and needing to be done on behalf of workers in meat processing. What made this IUF Conference so special, however, was that for the first time this conference also focused on the unique issues and challenges women face in the meat and poultry processing sectors.

UFCW 401’s Union Labour Relations Officer Faduma Ahmed was on hand to chair important round table discussions on a variety of topics and questions.

“Priorities for women workers were adopted by the IUF Meat Division and included the active pursuit of affordable accessible quality childcare and the commitment to fight against gender-based violence and harassment,” Faduma tells us.

Questions the group discussed involved identifying major issues affecting women in the sector, what must happen to create a more supportive environment for change, and what we need from our brothers in the industry to ensure positive change.

Participants identified several areas of concern such as, childcare, sexual harassment, gender-based violence, lack of equal opportunities for higher paid jobs, and how COVID-19 has disproportionately impacted women in the workplace.

Delegates identified the need for community engagement, including supporting Temporary Foreign Workers and seasonal agriculture workers when integrating into their new communities upon arriving in Canada – something UFCW has decades of experience in. Also, the importance of available, affordable childcare were discussed, the benefits of which would result in fewer labour shortages that are, at times, common in this industry.

“We also focused on the importance of women’s involvement in workplace committees, training workshops, and having more women in shop steward roles,” Faduma reports. “Domestic violence protections must be negotiated in all union contracts, and this requires women at the table and mass participation in all union activities.” Scot Walker, IUF Meat Division Convenor, declared, “we have a work program through which affiliates will fight against discrimination and coordinate their response to transnational company attacks on safety, living standards, and the environment, in order to build a better future for all meat workers and their families”.