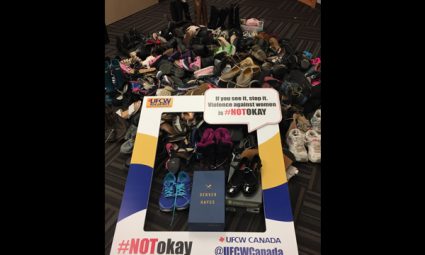 For the second year in a row, in conjunction with the December 6th National Day of Remembrance & Action on Violence Against Women, UFCW Local 401 members have really stepped up to the plate in their efforts to collect shoes for local women’s shelters.

The purpose of this annual effort is to not only raise awareness about the harsh reality of violence against women in our society, but to also collect and donated gently worn women’s shoes to local area women’s shelters across the province.

Last year 401 members were able to collect 35 pairs of shoes and were donated to LaSalle, which is a “second stage” shelter. This year the members blew that number out of the water, collecting nearly 1000 pairs of shoes!

This year some of the shoes will be donated to local shelters in various communities around the province as well as Wings of Providence, a second stage shelter that offers affordable housing for women in need.

Every year the numbers of those requiring the services of shelters grows. According to the Alberta Council of Women’s Shelters, more than 10,000 abused women, children, and seniors accessed shelters in 2015-2016. At times the demand is so high that they have to turn people away in their most desperate hour.

On December 6th NDP MLA Chris Nielsen, during session, recognized the Local 401 women’s committee for their efforts in this important initiative. In addition to the recognition by the Alberta Legislature, MLA Nielsen made an impassioned plea to the House for the need to recognize the necessity to end the cycle of violence against women. He concluded with, “until everyone realizes that violence against women is not acceptable, the least we can do is help them walk away with from it.”

On December 12th a presentation of the shoes was made to Wings of Providence Fund Development Assistant Sarah Filshie-Palmer. Sheena Thomson, 401 Chair of the Provincial Women’s Committee, also talked to the media about UFCW’s involvement in the event and worked hard to coordinate the efforts in the Edmonton area.

Filshie-Palmer was humbled and very impressed by the extraordinary efforts of 401 members and their Women’s Committee for all they have done to assist.

Additionally, MLA Nielsen’s Constituency Manager, Maria Vicente, was on hand to talk about her experience with domestic violence. She spoke passionately about the need for the shoe drive since many women flea dangerous situations with nothing more than the clothes on their backs. MLA Nielsen sent his regrets, having been stuck outside the country due to weather, via video message but spoke of the day when violence against women no longer exists.

The shoes were also collected at various NDP Edmonton-Area Constituency Offices and through NDP Caucus Members.

Also, 401 members around the province worked hard to make the shoe drive a success and donated shoes were given to the shelters in those towns. Hinton, Sherwood Park, Camrose, Wetaskiwin, Leduc, and Lloydminster were among some of the outlying areas where dozens of shoes were collected for shelters locally.

As you’ll see in the featured picture on this article, Hinton Steward Linda Keith shows the collection of shoes, clothing, and toiletries – ready for the Hinton Women’s Shelter.  All were donated by the incredible 401 and 1118 members in town.

We want to say a big warm “thank you” to all the amazing members of 401 who went above and beyond to ensure the success of this shoe drive. 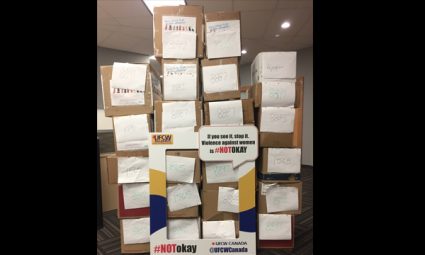 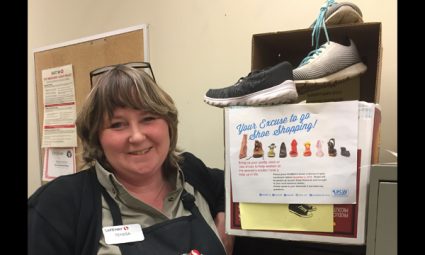 One of our many amazing Stewards, Teresa from Camrose Safeway 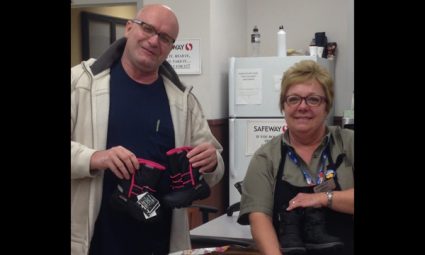 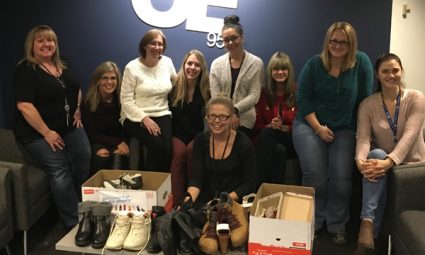 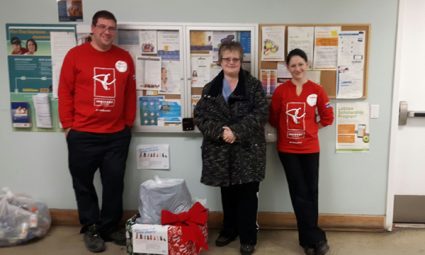 Camrose Superstore workers got in on the fun too: (L to R) Andrew, Shop Steward Lori, with Carmen 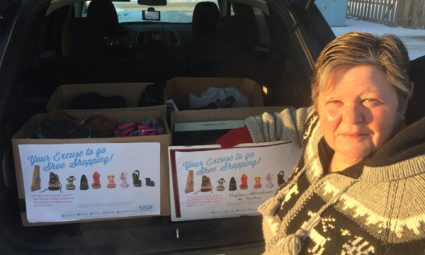 Hinton Steward Linda Keith with the collection of shoes, clothing, and toiletries - ready for the Hinton Women's Shelter. Donated by the incredible 401 and 1118 members in town