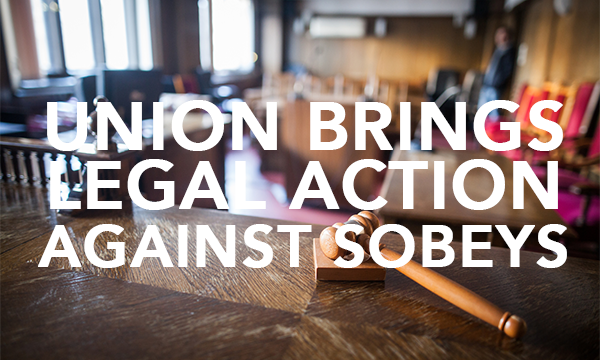 UFCW Local 401 has given Sobeys every reasonable opportunity to come clean about their intentions for the future of Safeway stores in Alberta. Their failure to be forthcoming and truthful is making it impossible to bargain the issues for Safeway employees; the company simply won’t tell us what their plans are. They expect us to bargain in the dark on issues. How can we know how to protect you if we cannot understand what the threat is?

Our complaint will be heard by the Alberta Labour Relations Board, a special tribunal that was created and exists to police labour relations in the province of Alberta and make findings about facts and law. It is similar to a court in that hearings are conducted with witnesses and lawyers. UFCW Local 401 members will be advised when hearings will occur and will be invited to attend. Local 401 is asking the Labour Board to force Sobeys to cough up the truth.

“I am sick of the company blaming the union for a lack of progress at bargaining,” said Tom Hesse, UFCW Local 401’s Chief spokesperson at the bargaining table. “The company’s secrecy and stubbornness are causing the process to drag on.”

“An important component of our union’s approach to the bargaining process is complete transparency with our members,” added Hesse. “Our union belongs to union members. In these important negotiations, Safeway employees will have very important decisions to make. How can they do that in the dark, not knowing what the company’s plans are for Alberta Safeway stores?”

In the context of this new legal action, it is important that union members understand our approach to bargaining. We outline it here:

We have sought to have a maximum possible level of communication with our members. You receive frequent updates from us that tell it like it is. Our union bargaining committee and council members have been visiting stores providing updates and perspectives on negotiations.

Union members who wish to see the process for themselves are invited to attend bargaining. Some of you have. If you feel you have something you want to tell the company directly, we invite you to come to negotiations and tell them. Sobeys might prefer that you just receive their spin through their “Safeway Talks,” but negotiations are about talking and listening. Sobeys needs to listen to you.

2. Collaboration is a two-way street

Local 401 looks for collaborative approaches for bargaining with Sobeys management. We try, wherever possible, to find common ground with Sobeys. We try to think about making a deal that will really be in everyone’s best interest. We are very open with the company about how our members feel. We’ve openly shared our union member survey with them. Unfortunately, Sobeys will not share their business plan with us. All we ask is that they be as open as we are.

During a time of economic uncertainty, we have proceeded sensibly and deliberately. It is no secret that Sobeys bungled the Safeway takeover. We have been generous, not adopting a highly adversarial and militant approach at the outset so as to give Sobeys an opportunity to get their house in order. In response, the company has been difficult on simple issues that cost them nothing but increase your voice in the workplace. That’s not very collaborative. Also, be reminded that Sobeys’ business is on the economic upswing.

3. Customers matter in this

You know customers better than anyone. We have not forgotten about customers and have engaged with them for months. Through our Good Groceries campaign, we have communicated directly with Sobeys and Safeway customers through advertising and the distribution of materials in front of grocery stores, including our popular Good Groceries reusable bags.

In the event of a dispute with Sobeys, rest assured that we have done our homework by sensitizing customers to your workplace issues inside and outside the stores.

4. Ensuring a fair process based in “good faith” negotiations

In our opinion, Sobeys’ repeated refusal to reveal their business plans in Alberta is unlawful. Sobeys has a legal obligation to bargain in good faith, and it cannot be said that Sobeys is bargaining fairly when they are not being direct and honest with us, while at the same time misrepresenting the bargaining process and the conduct of Safeway employees’ union.

We cannot be sure of the outcome of our Labour Board complaint, and it is our expectation that the process will not move along quickly. However, hearings will be scheduled. They are open hearings, and you’ll be advised of their time and location and will be invited to attend.

5. A strike will come if the time is right

Local 401 is being sensitive to the “timing” of collective bargaining. We are keenly aware of our legal obligation to bargain fairly on the many issues that Safeway union members have asked us to address at the bargaining table. But at some point, bargaining will come to a head.

We have not abandoned the possibility of taking a strike vote, and later on utilizing the last resort of an actual strike. But a strike is a last resort and just one of a number of tools we may have to use. In any event, under the law, there is a process of mediation that must come before a strike vote can be held. The company does not like us talking about this and says that it is “premature.” Yet in another breath, they have suggested that bargaining is dragging because of the union.

Remember, the company could use its weapon of threatening to or actually locking you out to achieve its bargaining demands. A strike could be a response to this. Again, however, a work stoppage is not just difficult for union members; it would be very difficult for the company as well. On the other hand, if efforts of collaborative and rational argument, an engagement strategy with customers, and legal action are not successful in softening Sobeys’ perspective, we would have few options left. At that point, hopefully, the strong strike vote would have its desired effect. Again, an actual strike would be a last resort.

Pulling out all the stops

In all of the above, it is clear that we are pulling out all the stops for our Safeway members – a broad-based, public communications campaign combined with transparency and openness with our members, supported by mechanisms available to us under the law.

The legal action we have taken against Sobeys is just another element in providing you with a voice.

As part of our policy of complete transparency, we’ll advise you on an on-going basis on the process of our complaint at the Labour Board. Again, please consider attending these public hearings when they are held.

Regardless of the outcome, it is important that you know that Local 401 is committed to utilizing every available strategy that we have to ensure that bargaining is conducted fairly and that the outcomes are as favorable as possible for Safeway union members.

We have no greater or more important objective.

We are bargaining again on August 13-16, 2019, in Edmonton. If you wish to attend bargaining, please let us know in advance through your Union Labour Relations Officer.

CLICK HERE FOR A PRINT-FRIENDLY VERSION OF THIS UPDATE