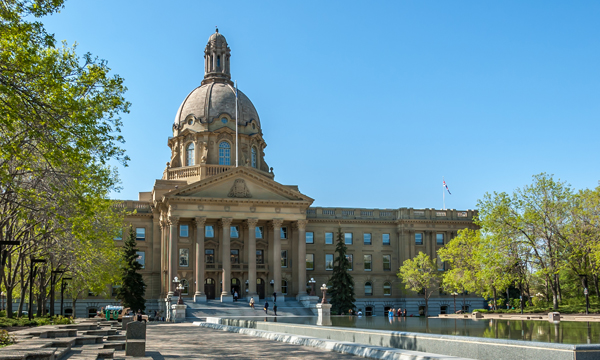 UFCW 401, along with leaders from other Alberta unions, attended a meeting with Shawn McLeod, Deputy Minister of Labour and Immigration on Friday, December 6that his invitation. We were told it was part of a “consultation” process regarding the UCP government’s intent to make changes to the Alberta Labour Relations Code in the spring of 2020.

There were several concerns raised by worker representatives about this so-called “consultation” process. Public sector unions, whose members are currently being devastated by mass layoffs due to the recent budget cuts, were also very concerned about the effect of a consultation process that looked like anything but real consultation.

New 401 Secretary Treasurer Richelle Stewart asked the Deputy Minister to take back a message that unions in Alberta are indeed united.

“UFCW 401 stands in solidarity with public sector unions,” Stewart declared at the meeting.

Concerning at the start was the discussion paper for the meeting, which suggested that Alberta’s Labour Code is “out of balance” after the 2017 amendments by the previous government. This assertion had worker representatives at Friday’s meeting with the Deputy Minister deeply concerned because workers’ rights were improved significantly in 2017.

Newly elected 401 President Tom Hesse pointed out that the 2017 changes to the Code brought Alberta’s labour laws more up to date and in line with other provincial codes, and has achieved a better balance as a result. To suggest that the newly updated Code is out of balance is not only inaccurate, it signals a troubling hint of how the government views workers’ rights.

“Labour law is intended to provide balance and a process to deal with conflict,” Hesse argued. “We believe the current Labour Code provides that balance already.”

Some of the key changes the government is looking at that could affect UFCW members are:

President Hesse stressed that unions are humanitarian organizations. Worker collectives like UFCW provide a much-needed counter-balance to employers’ overwhelming power, and this includes the right to speak freely on all manner of issues affecting workers. Humanitarian groups like our focus on issues like health and safety, equity issues, and living wages, leveling the playing field for workers, and giving them access to due process when an employer abuses them. President Hesse stressed these principles over and over in the meeting.

Because of our humanitarian approach to workers’ rights, we oppose any effort to block our advocacy work for workers on the grounds that it is “political.” For example, UFCW 401 is part of an international political movement to stop employers from using the chemicals BPA and BPS in cash register receipts. Both chemicals have long been known to have the potential for seriously harmful physical and cognitive effects. Retail workers handle these chemicals every day in the receipts they give customers, and we’re not about to give up our ability to make political demands to protect their health and safety.

UFCW is a humanitarian organization at its core. We advocate on many issues facing workers which often overlap with political issues, such as health and safety matters, legislation affecting wages, overtime, and many other areas that impact workers’ daily lives. The risk of worker advocacy groups being prohibited from speaking up on matters such as these, and others, simply because the government of the day deems it “political” is troubling to say the least. What this means is, if a government doesn’t like our opposition to, or support of, an issue affecting workers and communities, they may simply shut us down because they don’t like us lending our voice to the cause.

Members of 401 have asked their union leadership to do just that; lead. You deserve to be protected and have someone representing you on an array of issues affecting you and your family’s well-being.

“This is about doing the right thing,” says Hesse. There are some troubling warning signs we’re seeing with this Labour Code review.

You pay your dues, and you deserve to have your advocates enjoy full participation in the democratic process to influence changes benefiting you and your family.

“401 members deserve the best representation their dues can pay for, and we are committed to doing just that, no matter what opposition we face,” Hesse explained.

Another concern with this review of the Code is the fear that they are seeking to move away from, or water down, the first contract provisions new to the Code. This legislation allows for either party, the union or the employer, to apply for first contract arbitration. This is helpful for workers who have just formed a union in their workplace and who are trying to get their employer to agree to a fair first contract. Before this legislative change, some very anti-worker employers would stall and use every tactic possible to avoid signing a first union contract. Employees would then be forced to strike, sometimes for months, in order to attempt to have their first contract.

UFCW 401 has seen our share of first contract strikes that could have been avoided with the labour legislation we have today:

401 fights hard for its members. We will continue advancing human rights issues that affect you.

Human rights issues are important and we need to be able to speak about them to our members and to the public in order to affect positive change. Advocacy such as that which UFCW 401 and other unions undertake is at the behest of the membership. Simply put, as a humanitarian organization, we speak truth to power every day and we cannot allow for a labour code that prevents us from doing this or providing obstacles to properly fund our advocacy and human rights work.

Meaningful consultation involves meeting face to face with all stakeholders – unions, employers, non-profit and other advocacy groups. It takes time. It cannot be rushed. The previous government started their labour code review process in 2015 and did not complete it until all interested and affected parties had time to participate. It was done carefully, thoughtfully, and respected the fact that an undertaking of this importance and magnitude takes time. The changes to the Labour Code did not go into effect until 2017, giving everyone the confidence that all viewpoints and submissions were considered.

President Hesse and Secretary Treasurer Stewart argued passionately about protecting the interests of workers and the need for healthy communities, which goes to the very heart of our humanitarian agenda and function at UFCW.

As this develops, we will be sure to keep you updated. In the meantime, if you wish to get more involved on issues like these, please contact Matt Gilks or Nathan Fortin at our Political and Community Action Committee (PCAC): pcac@ufcw401.ab.ca