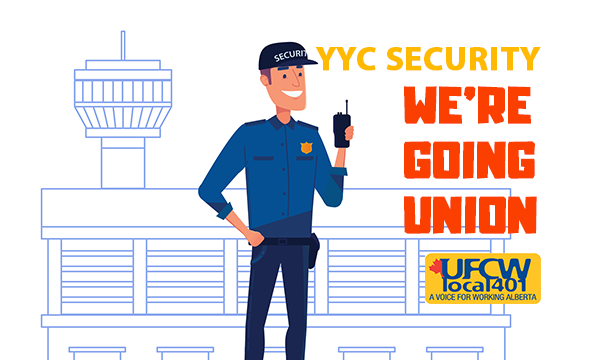 YYC guards are employed by Ontario-based ASP Security Services, a company contracted by the Calgary airport to provide security to passengers and the public. ASP is a wholly-owned subsidiary of ICTS Europe, one of the world’s largest employers of aviation security guards. ASP employees’ application for union certification, filed at the CIRB today, involves over 100 security guards at the Calgary airport.

Soon after ASP commenced its contract with YYC in 2018, employees began to complain about basic workplace concerns not being addressed, like not having adequate space to take breaks and eat lunch as well as issues related to scheduling and coverage for breaks. They felt there was favoritism and a lack of consideration in the company’s approach.

Guards are expected to remain diligent in their duties and friendly to the travelling public while ASP seems to disregard basic issues involving workplace dignity and respect.

“Guards work hard every day to keep passengers and the airport safe,” said Chris O’Halloran, a Director with UFCW Local 401. “With this high level of responsibility, employees want to ensure their employer is held accountable for its legal obligations to them. One of the best ways to do that is to organize and negotiate an enforceable union contract.”

While ASP management worked hard to discourage employees from forming a union, employees overcame these adversities and remained focussed on the goal of changing their workplace for the better by seeking effective and strong union representation. With their application submitted to the CIRB today, the legal process for winning a union has taken an important next step.

“One of the company’s slogans is ‘security matters,’” noted O’Halloran. “Well, we say to ASP employees, so should you. We want ASP guards working at YYC to know that, with a union, you have a voice at work, that you have people and resources to back you up as you do this important work.”