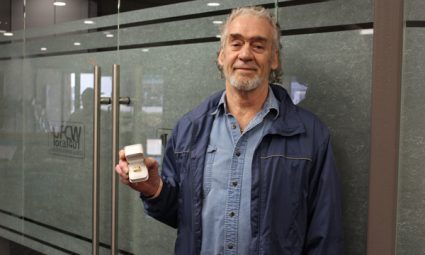 After 41 years with Canada Safeway, Brian Nitz hung up his smock and retired in March 2015.

Having started with Safeway at the McDonald’s Consolidated warehouse in 1969, he moved over to the retail side several years later and worked his way through about 10 different stores, and every single department other than Meat and Deli, throughout his 40 plus years in the stores.

When asked if he has any fun stories about his 4 decades at Canada Safeway, he immediately recalls the fun his coworkers used to have with his mode of transportation.  For the last 10 years, Brian has been riding his bike to work – no matter the weather or season.  He fondly recalls the many creative places that his coworkers would hide his bike.  Whether up in the rafters in the back room, in the dairy cooler, or in some dark corner, he did always find his ride in order to get home but he enjoyed the creative hiding places his coworkers came up with over the years.  Having a sense of humour is one of the many reasons Brian was happy to make Canada Safeway his career for most of his working life.

In his retirement Brian has already begun his travel plans with his wife Cathy, and have already made their way across Canada to several destinations visiting family.  They are also both exploring different volunteering options and hope to land on one or two places to lend their time in their retirement very soon.

Brian, we congratulate you on your retirement and wish for you a long and healthy one.