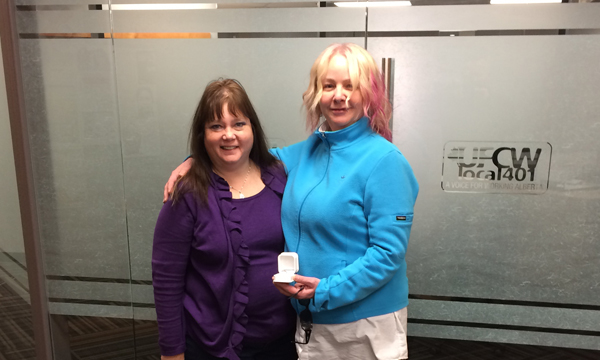 Lucie (R) with her rep Cheryl

It is always hard to say “farewell” to those who have been a part of your world for a long time.  Longtime activist Lucie is retiring after 30 years at Superstore and she will be missed by her coworkers and all of us at Local 401.

Having worked in several different Superstores throughout Edmonton in her career, Lucie demonstrated a love and caring for those around her, not least of which are her coworkers.

As many of us are looking to slow down in our later years of work, Lucie’s involvement in helping others only picked up.  For the last 8 years she served her coworkers as Shop Steward, took numerous courses offered to her through her union, and attended several labour conventions.

Now that she’s going to have more time to focus on herself and her family, Lucie plans to spend that time reading, exercising, relaxing, and has decided that she may explore other educational opportunities as well.

Though she has many hobbies to keep her busy, like playing bridge, cycling, and doing fun activities with her puppy, she says being a grandmother means the most to her.

When asked about her time as a union activist Lucie says, “I enjoyed being a Shop Steward and helping my coworkers and I’ve also enjoyed working with my Union Reps, and I think the world of my Rep Cheryl.”

Congratulations, Lucie!  Thank you for all you’ve done for workers in this province.  We wish you all the very best in your retirement.

Lucie (R) with her rep Cheryl