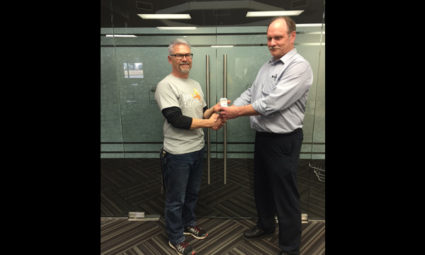 Terry is the latest 401 member to be retiring in a month’s time and we send a giant “congrats!” to him.

A 41 year member of UFCW 401, Terry worked at the Safeway DC (Distribution Centre).  Having moved around throughout the years between departments, Terry has worked in the Variety Warehouse as well as in Produce/Perishable.

Over the years Terry came to be a well-respected worker and union member who often lent his expertise and wisdom to assist in working out issues at the workplace and making sure things ran smoothly.  After a busy career, he plans to kick back and relax with wood working, photography, tinkering with cars, and singing whenever he gets the chance!

Terry, we wish you all the very best and look forward to many years of continued union involvement now that you’ll have some extra time on your hands.  Take care, brother!