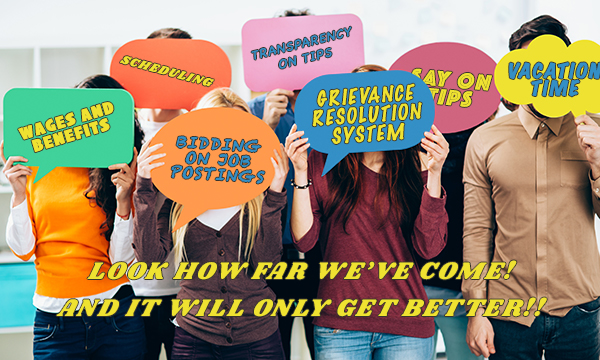 Your Contract at Hilton Garden Inn

Come here for the latest updates on our campaign to secure a first collective agreement for employees at the Hilton Garden Inn and Homewood Suites in Downtown Calgary.

TIPS, GRATUITIES AND DUE BACKS

As you all know, the new owners of the Hilton Garden Inn and Homewood Suites (InnVest Hotels) met with your bargaining committee this week.

And, through your bargaining committee’s hard work and devotion to improving the terms and conditions at the hotel, we were able to achieve (and unanimously recommend) a contract offer with InnVest.

We entered the week with confidence and enthusiasm that we could negotiate a brand-new deal with this wholly Canadian management team, and it appears that the sale of the hotel to new owners has come with a new attitude towards company/union relations and a fresh perspective on how to treat workers at the Hilton.

The issues remaining on the table from previous negotiations were principally around wages, but also housekeeping workloads and benefits. And your committee managed to gain improvements in all of these areas.

As you may recall, there was a mediator’s report that was rejected by the members in January 2019, mainly due to the mediator not addressing wages in any meaningful way.

Now we strongly feel that shortcoming is corrected, we will share these improvements with you in meetings on Friday. At that time, we will conduct a secret ballot vote at which we recommend that you vote to accept the contract.

Please be sure to attend and gather all the necessary information to make an informed decision about your work-life. We will be there to answer all questions you might have, in detail.

“I absolutely want to praise Joey Gabales, Haelm Balalong, Amandeep Setia, and Raquel Santos, for all their hard work,” said UFCW Local 401 negotiator, David Smith. “It was a lengthy and arduous process, but they never wavered once in their dedication to their fellow workers. If you have a chance over the next few days before the vote, please take the opportunity to thank them personally. They have sacrificed hard days on behalf of the Hilton staff to reach an achievement of which we should all be proud – A first collective agreement at the Hilton Garden Inn and Homewood Suites!!!!”

On Friday, January 24, 2020, we will hold presentations at 12pm, 2pm, and 4pm at the Hilton in the St. Louis Ballroom III. You can cast your secret ballot during polls any time between 12pm and 6pm.

Since our last update, Widewaters has sold the Hilton to a company called InnVest. This change in owners has meant a change in the characters in negotiations for a first union contract at the hotel

In earlier meetings, the most difficult hurdles were the “hired-gun” negotiator leading bargaining for Widewaters. We have found that third-party negotiators tend to be purposely difficult and hard to trust because of a lack of personal investment in the proceedings.

Talks have since opened up a lot. InnVest Hotels has more experience with Canadian unions, and it seems a lot less anxiety. This level of comfort seems to be true of InnVest’s new lead negotiator and Human Resources advisor, Binny Saran, who has about twenty years of experience in the hotel industry dealing with our sister Local in Ontario, UFCW Local 175.

Unfortunately, Ms. Saran can’t be ready for our earlier planned December dates. However, she has told us that she is planning on working over the holidays to be prepared for our new bargaining dates of January 13-15. As your bargaining committee we are committed to building a solid working relationship with our new owners and although we are disappointed with the slight delay, it won’t discourage us, and we will work extra hard to achieve a positive outcome for all the employees at the Hilton.

Still, we are quite happy with the progress on non-monetary issues.

One example of important gains are in grievance language, which is a critical tool for union activist’s success in levelling the power gap between managers and workers.

One of our jobs as union members is to solve small problems at work, hopefully before they become huge obstacles, which is achieved through strong solidarity and fellowship amongst the workers.

But when early intervention is not enough, grievance procedures serve to protect workers against arbitrary choices of employers about discipline, firing, or benefits. They also give us a legal process for enforcing the terms of our union contract.

Typical issues needed to resolve can include:

Our job is to help workers solve their problems in a way that builds justice in the workplace, and grievance language is one of the most important vehicles to success in creating a welcoming workplace by greatly lowering random decisions by managers.

“We know this has been a long process for everyone,” said lead union negotiator, David Smith to Hilton employees “We appreciate everyone’s patience. It won’t be long!! Stay strong!!”

TIPS, GRATUITIES AND DUE BACKS

YOUR UNION CONTRACT – ARTICLE 23: TIPS, GRATUITIES AND DUE BACKS

Any employee interested in being on the dues committee can apply to the Union office in writing to sreed@ufcw401.ab.

Fresh news for our Hilton members! We have just received from the Labour Relations Board confirmation that:

If you’d like to see the official facsimile for the Alberta Labour Relations Board, the notice is here.

We are pleased that we can now get on with systematic improvements to your workplace conditions via the collective bargaining process.

If you have any questions, then please contact your Union Labour Relations Officer Stephen Reed.

You can reach Stephen at:

As mentioned last week, we have moved into “First Contract Arbitration.”

So what is “First Contract Arbitration?” During their last term, the Albertan NDP government brought in legislation that allows for binding arbitration in situations where a first collective agreement can’t be reached.

First contracts are particularly challenging and regularly leave unions exposed since the employer previously had little motivation to bargain in good faith and sign a contract.

Neither side may apply for assistance until a minimum of 90 days of bargaining has passed with no agreement.

Once applied for an arbitrator appointed by the Labour Board will produce orders to help the sides move ahead, and make final decisions on items that continue to conflict.

Though uncommon, strikes and lockouts are most typical during first agreements.

Binding arbitration is not a perfect answer. However, it does reduce work stoppages and help to move negotiations. Second agreements are invariably easier to negotiate once employers have a chance to see for themselves that unionization isn’t the end of the world and generally helpful for stabilizing a workplace.

A union contract also called a Collective Bargaining Agreement (CBA) is a set of rules and procedures (called “contract language”) that are agreed to by the union members and the Company. The CBA is essentially a rulebook that clearly defines the terms and working conditions.

As well as several other items to make sure that you get paid and are treated fairly at work.

Sometime later this fall, your union bargaining committee will be meeting with the Company and a special independent arbitrator to begin First Contract Arbitration.

The focus of the arbitration is wages and benefits – what’s called the “monetary” or money items in the Collective Bargaining Agreement.

The non-monetary items we have completed because the contract language your bargaining committee negotiated in earlier mediation is excellent!

These non-monetary items are particularly useful in regards to recognizing your seniority rights, your scheduling, respect from your supervisors, better vacation language and more.

Over the next few weeks, we’ll be taking a look at some of these contract language achievements.