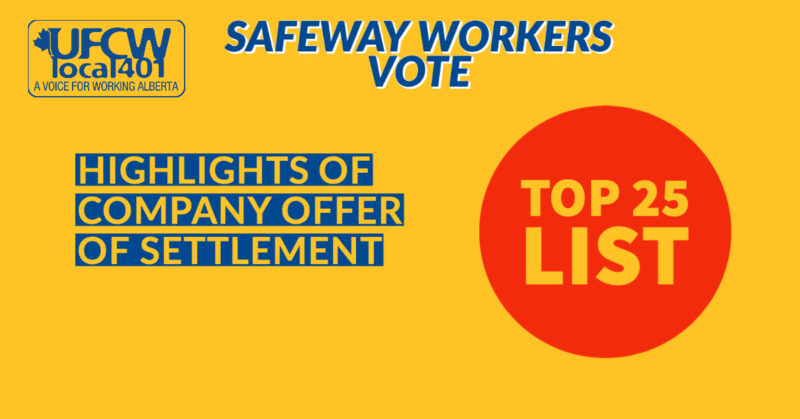 We have now sent you the entire proposed Safeway union contract. You are faced with a critical decision.

One option you have is to accept the contract. The other option you have is to go on strike. It is important to understand that a strike obviously does not happen on its own and it will involve a commitment on your part to picketing for a substantial length of time. Your bargaining committee has been meeting with the company for months and months and it is their considered opinion that the offer of settlement is a final one and the only other option is to attempt a massive and lengthy strike.

The proposed union contract is a unique one and reflects the unique times we’re living in. Unionized Safeway workers face a new employer. Sobeys is part of the Empire Group, a national and powerful corporation worth billions of dollars. They bungled the Safeway takeover, but are undoubtedly doing well, in part, as a result of enhanced sales during the COVID-19 environment. The company’s wealth has created union demands for fairness. Employees deserve their share! The company argues that sales are leveling off and may even dry up as consumer incomes wither with rising unemployment and things like CERB are being phased out.

The retail food business as a whole is transforming. Various types of online sales platforms are expanding. Amazon has introduced grocery stores without cashiers. Consumers are flocking to discount stores like No Frills and FreshCo as working class incomes shrink and consumers are looking for better value.

Union negotiations have now commenced in Alberta with one of Sobeys main competitors, The Real Canadian Superstore. Similar tensions exist in those negotiations. As Alberta workers, like Safeway and Superstore employees, feel the frustration and anxiety of the times many undoubtedly are considering militant options like going on strike. Unfortunately, the Alberta government is putting up roadblocks to suppress worker freedom of expression. For a strike to have any impact on Safeway we would have to picket the over 50 Sobeys stores in Alberta. During a strike or lockout, Sobeys would be able to transfer their Safeway business to their non-union Sobeys stores. The Alberta UCP government is enacting a new law that would restrict picketing generally and also make it difficult if not impossible to picket the Sobeys stores. The new law is called Bill 32. The UCP has also recently enacted another law called Bill 1, also intended to restrict or even criminalize legitimate protest. Alberta, of course, also does not have anti-scab laws to prevent workers from being lured across the picket line by unethical managers. We highlight some of these points as part of our sharing of information and transparency initiative. When casting your ballot, you are entitled to know the potential impact of the political and legal environment if we were to consider a strike.

Finally, it is important to know that the company can lock you out and may do so if you reject the offer. They can do so on 72 hours notice.

Union negotiators believe that the company should have done better in this contract in terms of wages. Union President Thomas Hesse comments, “Frankly, in my over thirty years of experience, I’ve never felt personally satisfied with the wages paid to our members. Their work is undervalued. Also, I’m a believer in a higher-wage economy. When workers receive good wages, they spend that money in the community, and it creates a more dynamic economy for everyone. If you want to know my opinion of Sobeys, I’m happy to offer it. They are cheap.”

On the other hand, the wages in the proposed settlement are better than they were before the strike vote. Also, Safeway employees have been saying that their main goal has been to hang on to what they have and that any wage increases they aspire to are modest. Since the strike vote, Safeway has doubled the retro-pay offer and there is an immediate wage increase. There wasn’t one before the strike vote. The second and third years of the collective agreement, unfortunately, only present lump-sum payments to the staff. However, in the fourth and fifth years, there are opportunities to negotiate wages. These opportunities are good and at that time real arguments can be made to improve wages to suit any economic trends.

Immediately below you will see a chart of twenty-five issues outlining some key bargaining successes. If you review the entire proposal you will see others. It is important that you carefully weigh the value of these successes versus the prospect of a strike. Obviously, like any deal, there are pros and cons to be considered. If you feel the contract is enough to reasonably meet your needs, then vote yes. If it’s not good enough in your mind and you are also prepared to take the bold step of picketing, Local 401 will be there for you to support that decision.

As you review the final documents that were sent to you yesterday, we would like to highlight several points of interest. Below is a summary of some key successes Safeway members achieved by working with your union to send Sobeys a strong message with a strike vote. For those that find the offer acceptable it is important to hold your head high as your strike vote improved the offer significantly, not just for yourselves, but even for those who voted no for the strike.

Finally, this deal is not concluded, and you have full democratic opportunity to accept it or choose a more militant course of action. It is critical that you come out and vote. Please be reminded of the voting times and locations.

You can access your voting dates and times calendar HERE