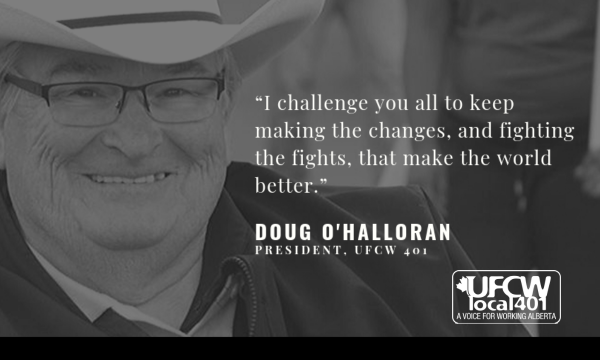 A Statement from President Hesse and Secretary-Treasurer Stewart

We write to you today with feelings that are both sombre and inspired by the struggles of one of our own. Many of you will know that today marks the first anniversary of the passing of long-time UFCW Local 401 President, Douglas O’Halloran.

For those who didn’t know him, Douglas was a titan of the labour movement who helped build one of the largest and most storied local unions in the UFCW and the largest private-sector union in Alberta. He was also fondly known for his straight-forward approach to fighting for working Albertans.

Over his career with our union, Douglas led us in unprecedented battles with employers and governments that have sought to tip the balance in favour of employers. As one commentator put it, “UFCW 401 took on some of the toughest fights in Alberta labour history during Mr. O’Halloran’s leadership, including the province-wide Safeway strike in 1997, the Shaw Conference Centre strike in 2002, and the Lakeside Packers strike in 2005.”

Employers and governments are still trying to tip the balance in favour of employers and their powerful lobby groups, much in the same way that they did during the years of Douglas’ leadership.

Over the past year, we’ve been forced to confront unprecedented challenges, such as the COVID-19 pandemic. But there have also been many of the same battles we have had to deal with before.

With Douglas’ fighting spirit in our hearts, we are continuing to fight for our members and for all working Albertans.

In his message to us prior to his passing, Douglas left us with some important words that ring in our ears every single day, especially as we navigate these difficult times:

“I challenge you all to keep making the changes and fighting the fights that make the world better.”

Let us remember Douglas by building our solidarity as workers and fighting these most important fights, no matter what is put in our way. May you continue to rest in power, Douglas, our dear friend.