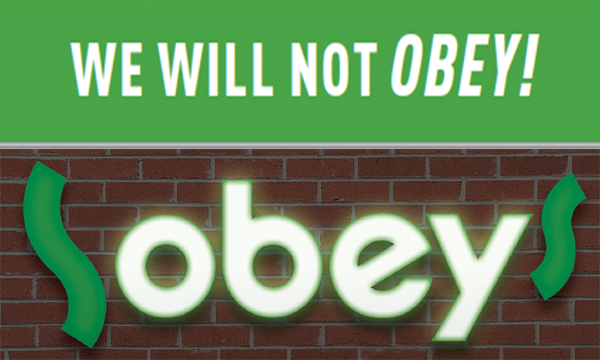 We Won’t Tolerate a Selfish Sobeys

What an eventful time it’s been! Last month, we held face-to-face bargaining meetings with Sobeys over three weeks, and as the process has evolved, we’ve been gearing up for even more activity – in the stores and in our communities – to bring attention to the perspectives and interests of Safeway employees.

Initial signs of progress and momentum at the bargaining table have tended to sputter. While talks haven’t stalled out, we need the company to focus its attention on what you need. Bargaining isn’t just about what the company wants; it’s about what will make Safeway a better and fairer place to work for employees.

Over the past year, we’ve been working hard to communicate – with Sobeys customers and employees working in both Safeway and Sobeys stores – about what it means to be a good grocery store. We have done this in a number of ways, including the distribution of thousands of shopping bags and leaflets across the province.

Our Good Groceries campaign has generated a very important conversation about what Safeway means to Safeway employees and customers alike. We’ve promoted Safeway stores as places where customers should feel good to shop – because the people who work there have rights and protections and are to be treated well. It’s what distinguishes Safeway from other retailers.

We’ve fought hard to bring this voice and perspective to Sobeys’ representatives at the bargaining table. We want them to understand the pride we have in Safeway and the work we do. There are no sales or profits without the hard work of Safeway employees.

Lately, Sobeys has boasted about their generosity towards others. The company has said, “charitable giving has been deeply rooted in our history.” Like a wolf in sheep’s clothing, Sobeys wants to “give back” to the charities they choose while taking much away from many of the same employees who have made them incredibly wealthy.

Make no mistake: Sobeys’ bargaining proposals are centred entirely on the company’s interests. They are a listing of severe cuts and selfish and unnecessary takeaways. To Sobeys, success seems to be winning a retail race to the bottom.

That’s not what we see as a good grocery store. They can and must do better.

Over the past week, we’ve been getting the word out in the stores through a NEW LEAFLET. Sobeys doesn’t like it. Here’s what we said:

As a Safeway employee, you should feel proud of the work you do bringing food to Albertans’ tables. You are the food workers’ union.

Sobeys bought Safeway in 2013 and bungled the takeover, alienating customers and employees alike. In the face of this, you worked hard, and the company is doing better now.

In negotiations with your union, the company wants to take away many of your rights and benefits and has offered no wage increases.

They won’t say which stores they might want to convert to FreshCo or some other banner. They are leaving you in the dark about the future of your store and your job. They won’t agree to a statement in our contract that says they shouldn’t discipline or fire you without “just cause.”

We may need to tell Sobeys that WE WILL NOT “OBEY.” We are employees, not servants. We will not tolerate a selfish Sobeys. Coming Soon… SELFISHSOBEYS.COM

Sobeys may not like what we say, but it’s not untrue. We take workers’ rights very seriously and will not tolerate corporate bully tactics.

We want meaningful recognition for the efforts of Safeway employees in saving Sobeys’ business in Western Canada. We want the interests of our members to come first. If necessary, we may need to do more. Our efforts may need to get tougher. We may need to get louder.

A strong collective agreement with solid wages and benefits is deeply rooted in the history of Alberta Safeway employees. A strong future is what we all want. But it need not be on our backs.